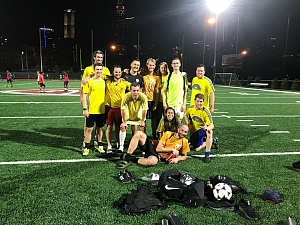 With 15 seasons and 4 trophies under their belts in Wednesday Open (!!!), Reynoldstown decided this season they'd make the jump to the Over-30 league. It worked out well for them, and after winning a close 4-3 match over Goalfellas, they've added a 5th trophy to the cabinet. Don't be fooled by this pic, this group definitely has their eyes on the prize!