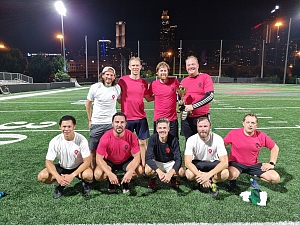 The Over-30 league had some new challengers make the title game over the last few seasons, but this time we saw a familiar matchup in Goalfellas vs Reynoldstown FC. In fact, it was the 4th time in 7 seasons these two teams played against each other in that elusive 9th game. None of those 4 games were won by more than a single goal, 2 went to a shootout, and the combined goal tally is a VERY close 13-11 🤯 Congrats to Goalfellas, who were the latest to take the title in this rivalry, and now have a 3-1 series lead! Same time next season?