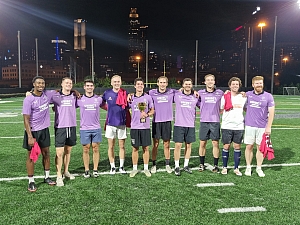 The lads in lavender are at it again! After scoring a ridiculous 52 goals thru the regular season and semifinal game, Throbb County went on to beat the crew from Apres Diem 3-1 to win their third D1 final in a row and their fourth in the last 6 seasons. The three-peat puts them in rare company, with only 14 teams ever matching or surpassing that feat in the history of SOPFC 😮 This is probably one of the strongest squads across all leagues, but it's worth mentioning they're great sports as well, having accumulated ZERO red cards in 6 seasons. Congrats again to this group, and thanks for being a part of our league!