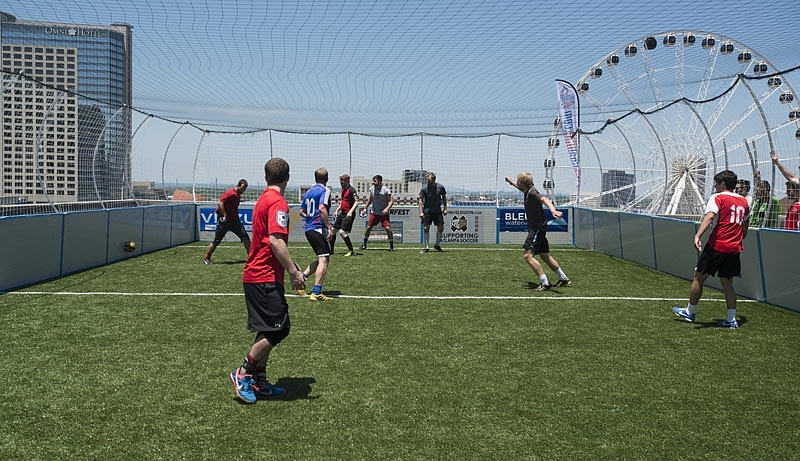 We are working on establishing year-round Atlanta rooftop soccer games in 2022, after hosting three successful weekend rooftop soccer tournaments in Midtown and Downtown, attracting a combined 150 teams, 1,200 players, and 3,000 spectators.

Interested in partnering on our rooftop soccer initiative? Contact us for more details. We are looking for strategic partners, advocates, civic and business decision makers, and sponsors.

"Soccer fans have found a new place to play their favorite games in Atlanta this weekend: rooftops. Players were on a downtown rooftop on Sunday playing the game ... on the top deck of a parking garage at 98 Cone Street. One of the co-founders said that with emerging development and fewer greenspaces, he hopes rooftop soccer will soon become permanent. 'My big hope is to start running leagues on rooftops and it's hard; it's different,' Christopher Wedge said. 'The only ones I know of are in New York and in L.A. and I think Atlanta is a world-class city and deserves one."

"Sons of Pitches FC has literally set its sights a little higher—8 floors higher, specifically. Atlanta’s largest intown soccer league is rolling out turf for its 3rd annual rooftop soccer tournament, this time heading to Midtown. The annual events are part of the organization's larger initiative to transform highly-accessible but underused space into active space necessary for urban residents and workers to maintain healthy lifestyles."

"Portable Dragon Goal turf soccer arenas with top netting will be set up on the rooftop of the 8-story Centergy Parking Deck. Last year’s Fall Rooftop Tournament in Downtown Atlanta featured 56 teams and over 1,000 participants and spectators."