A new reign begins! HJ's Scumbags surprised no one by making the finals again for the second season in a row, but it was Atlanta City FC that beat the division favorites in their inaugural season by a score of 1-0. Congrats to our new D1 champs, and good luck on starting your own streak ✨

Winter is coming? Nah, winter is HERE ⛄️ Monday Night's Watch found their form this season, and won the D2 final over sister team The Iron Throw-In by a resounding 7-1 scoreline. There are more than a few familiar faces with this group, but we'd be remiss without giving a special shout out to team gaffer Scott (@scohak), who has organized and played with enough teams since 2017 to total 63 seasons 😵 Congrats, and we'll catch you for the 64th season in the new year! 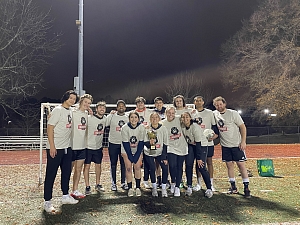 Our D3 final saw plenty of footwork in a battle between Ball Kickers and Messi Kicks, but it was the Kickers who earned the victory and will be playing up a division next season. It was a strong effort from another new team to the club, and we couldn't be happier to add to an already awesome group. Congrats, and best of luck in D2 💪