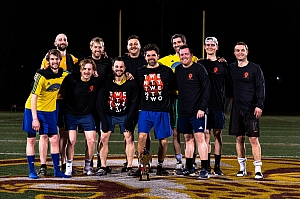 Back on top! Reynoldstown FC has made it to the finals in each of their four seasons since moving to the Over-30 league, but just couldn't quite get it over the line in the last two seasons, losing both finals by a single goal. This season saw a return to championship form though, and in a battle of neighborhood teams, Reynoldstown defeated Highlands OMSC 2-0. That makes six SOPFC trophies overall for this group since 2017 😮, tying them for fourth all-time on our Champions Wall!

Our Thursday Over-30 league is growing to 10 teams next season - will any of the new challengers break the streak? 👀