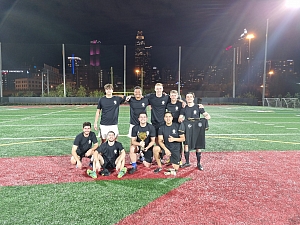 12 seasons. 4 years. 3 finals. 0 trophies. But in season lucky number 13, @apres_diem finally got that elusive trophy by way of a win over a very strong @netsixandchill_atl side! And to do so as the playoff's lowest seed makes it that much more of an accomplishment. We say it all the time, but Monday Open's top flight has been one of the strongest divisions across all of our leagues for a long time now, making this one of the harder trophies to capture. Thanks for another great season, and for bringing some of that "cool night time spot" energy to SOPFC! 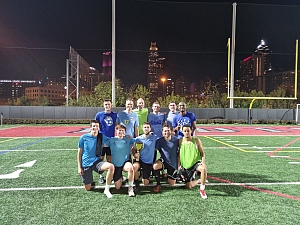 Monday Open's D2 championship was a VERY close one this season, and we had a clash between long-time SOPFC vets Dad Bods and newcomers Genna FC. League debutants may have won the regular season matchup, but in the rematch for the trophy, it was the Father Figures who claimed their first ever league title with a 2-1 win! We have to give a special shoutout to those few players still left from that original 2019 Run Like The Winded roster, and we can't thank you enough for your continued support. Best of luck in D1 next season!