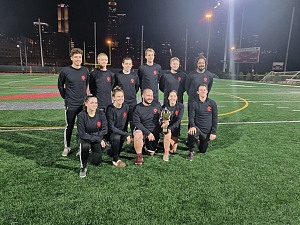 There are certainly Stranger Things than seeing Net Six and Chill winning AGAIN, and this latest one marks their 3rd in Monday Coed and 11th overall in club history. This season was particularly impressive: the team recorded ZERO losses through 9 games, and led the division in both goals scored with 32 and goals conceded with only 10. Will they go on a win binge and add to an already crowded trophy cabinet? Find out next season, episodes released weekly 🍿🎬 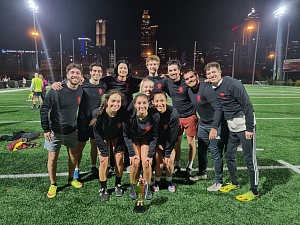 2 seasons, 2 trophies, and a lifetime SOPFC record of 14-2-2. That would be impressive for any team, but for new team Ball Kickers, it's just nuts! Last season's D3 champs brought that same pedigree to D2 this season, and beat opposing finalists Don't Go Chasing Soccer Balls 1-0 in a close championship match. You can catch this squad in Monday Open next season, where they'll shoot for a three-peat among some new competition. Congrats y'all!